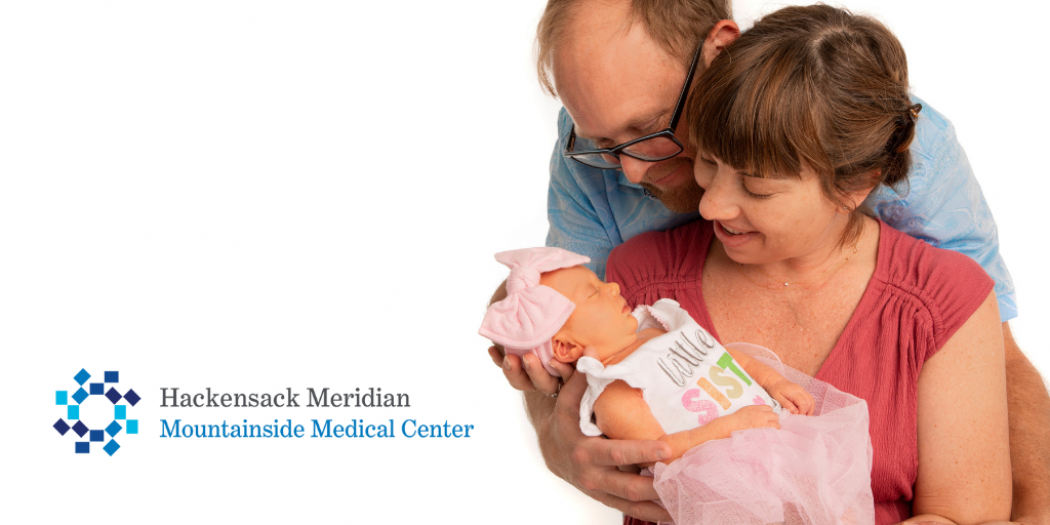 For Chrissy and Russell B. finding the right OB-GYN to deliver their first child was no easy task. After touring a few hospitals, they were set on delivering at Mountainside Medical Center but still needed to find the right OB-GYN to care for their baby during pregnancy.

“We chose Mountainside because it is a community hospital,” Chrissy said. “It’s  warm and inviting, and we just got a great feeling about it. The birthing center was pretty, clean and new, and everyone working in labor and delivery was extremely friendly.”

Chrissy found Daniella Montemurro, M.D., OB-GYN with Mountainside Medical Group halfway through her first pregnancy in 2017 and knew she was the perfect fit for her family.

Chrissy delivered her son Cassian at Mountainside Medical Center after a sudden, but relatively seamless, labor and delivery process.

At age 42, Chrissy became pregnant with her second child, and was classified as a high risk pregnancy due to her age. Chrissy saw Dr. Daniella Montemurro, and Daniella’s father and fellow OB-GYN, Robert Montemurro, M.D., as well as other specialists.

At Chrissy’s 20-week checkup she met with a perinatologist who noticed an issue and instructed her to go to the emergency room right away.

“I wasn’t in any pain or discomfort. I didn’t know what was wrong,” Chrissy said. “Dr. Robert met me at the hospital after I was told to go to the emergency room. I was obviously distressed and his bedside manner was great. He was so comforting.”

Chrissy was experiencing a condition called cervical funneling where the amniotic membranes were on the verge of becoming exposed. After she and the baby were examined, Chrissy was administered anesthesia and inverted on the table so Dr. Robert Montemurro could perform an emergency cervical cerclage. This procedure is often done to prevent miscarriages and preterm delivery. Though typically done by placing a single stitch around the cervix, Dr. Robert Montemurro used two stitches to give Chrissy a better chance of successfully carrying her baby to term.

Dr. Robert Montemurro prescribed antibiotics and scheduled follow-up appointments with her every two weeks. Though Dr. Robert Montemurro was able to perform the cerclage, the chances that Chrissy would lose the baby were still very high (upwards of 95%) because this happened so early in her pregnancy.

At 36 weeks Dr. Robert Montemurro was able to remove the stitches. Chrissy was able to carry the baby to 38 weeks and delivered a healthy baby girl named Leiapold, whom they affectionately call “Leia.”

“This was going to be Chrissy’s last baby, and I wanted her to be able to have great memories of her pregnancy, and not have to live with something devastating,” Dr. Robert Montemurro said. “I’ve been practicing for many years, and I consider this one of my greatest saves. Knowing Leia is here with us and healthy is a gift.”

Chrissy and her husband were so grateful she was able to have natural births despite complications in her second pregnancy.

“If I had had different doctors, I don’t think I would have my daughter right now,” Chrissy said. “I can’t thank them enough for their support and their advice throughout this. Leia’s our little miracle baby.”

To learn more about the hospital’s maternity services, visit www.mountainsidehosp.com/services/maternity-services. To register for a tour please call 1-888-973-4674 or click here.

Lyme Disease: What You Need to Know